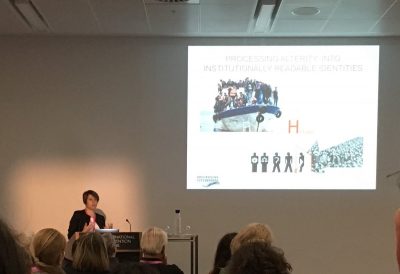 Analisa Pelizza was invited to discuss contemporary sociotechnologies of otherness to a panel organized by prof. Suchman.

“One of those experiences that you continue to savor for months”. With these words Annalisa Pelizza has summarized the discussion generated during the “Us and Them: Sociotechnologies of Alterity/Otherness” panel organized by prof. Lucy Suchman (Lancaster University) at the Annual Meeting of the Society for Social Studies of Science (4S).

The panel addressed “the generative possibilities of STS scholarship to examine sociotechnical infrastructures that materialize delineations of difference within human and more than human worlds”. It featured Karen Barad(University of California, Santa Cruz, US), who pointed out  how militarism, racism, imperialism, and colonialism are located inside the very terms of quantum physics.

Michael Christie and Helen Verran (both from Northern Institute, Charles Darwin University, Australia) have focused on the pressing necessity to consider language as a sociotechnology in the workings of parliaments, and to allow Australian aboriginal languages in parliamentary settings.

Annalisa Pelizza has followed, with a presentation titled “Processing Alterity. From Bare Bodies to Technological Spokespersons”. The talk has argued for an STS-informed understanding of procedures of identification and registration of people on the move at the European borders. Such an approach is meant to account for multiple, heterogeneous dynamics of exclusion and inclusion, involving not only migrants and the state in a closed, binary relationship.

Anita Say Chan (University of Illinois Urbana-Champaign, US) has discussed the entanglements of and experiments in techno-cultural collaboration from rural hack lab spaces in Peru, which distinctly engage materialities of nature, technology, and information to disrupt the dominant logics of digital universalism.

Finally, Lucy Suchman herself has presented the new developments in her long-term work on digital militarism by addressing how military training technologies aspire to recognition of the proxy bodies of war’s Others, both corporeal and virtual.

All in all, the panel was not only a success, attracting dozens of participants, but sown the ground for cutting-edge further developments in STS concerned with the enactment of the Other, and its political implications.

The Society for Social Studies of Science is the largest international STS scientific society, fostering interdisciplinary and engaged scholarship in social studies of science, technology, and medicine (referred to as STS). The theme of this year’s meeting was ‘TRANSnational STS’. By challenging the concept of ‘nation’ and investigating the issues with ‘trans’, 4S 2018 was of high relevance to Processing Citizenship.