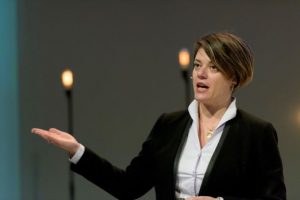 Annalisa was defined a “quantic” scholar by one of the colleagues who promoted her to full professorship. Whatever this was supposed to mean, Annalisa has always thought at herself as a craftwoman. Hence the title of this blog.

In quantum physics,  indeterminacy refers to the fact that the more precisely the position of a particle is measured, the less precisely its momentum can be predicted, and vice versa. Indeterminacy thus points to a fundamental limit in the way we can know. On the other hand, crafts(wo)manship is the ability to create something by assembling heterogeneous elements in not fully predictable ways. It points to possibilities in the way we can act.

Annalisa has learned from many persons and fields of activity, from academia to media art, from community empowerment to government. Analytical curiosity and fun in reshuffling categories have been the gifts that made undertaking such heterogeneous enterprises possible.

Annalisa’s research articulates a dialogue between social studies of science and technology (STS), studies of information systems and data infrastructures, and political studies. In particular, over the years she has conducted research on:

Annalisa has been the recipient of international and European Commission excellence science grants and currently leads the Processing Citizenship research group, funded by the European Research Council. The team is composed of three PhD candidates, two postdocs and a few research associates. It investigates transnational data infrastructures for migration management as activities of European governance transformation.

This site uses Akismet to reduce spam. Learn how your comment data is processed.